It has been widely reported that the Obama administration’s executive actions on immigration will expand deportation relief (“deferred action”) to millions of immigrants who are not currently eligible. Exactly how many millions is not yet clear, though many articles are saying “up to five million.” However, as pointed out by Dara Lind at Vox.com, that 5 million figure appears to include 1.2 million who are already eligible under the previously-enacted Deferred Action for Child Applicants (DACA) program.

The additional 3.8 million immigrants would become eligible if the administration extends Deferred Action to each of the following categories and subcategories:

If the administration’s plan includes all of the above and selects the more inclusive 5 year residency requirements for parents, then a total of 5 million immigrants will be eligible for deportation relief, 1.2 million of whom were previously eligible. The usual caveat applies: until we receive an official announcement from the administration, we can’t know for sure how expansive the new deferred action program will be. 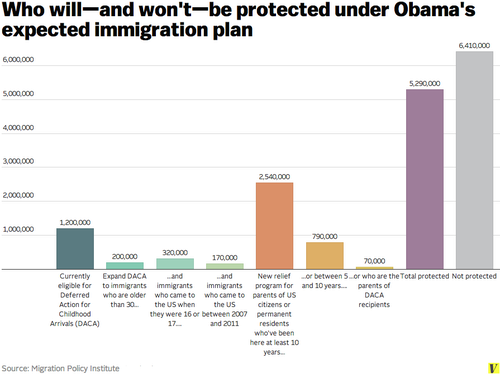 Subsequent to the issuance of the March 2020 Visa Bulletin, USCIS has informed prospective applicants of which chart to reference when determining if…More